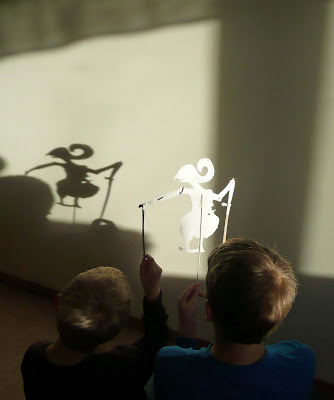 Well I hope everyone had a wonderful relaxing holiday break!!  I have had a major hard drive failure so sorry for the big break between posts.


The kids were back at school today but I won't be in until next week as I try to put my studio back together after the Christmas whirlwind!

Today I want to introduce you to Wayang Kulit or Indonesian Shadow puppets.  Now you can find shadow or transparent puppets in many Asian countries...those of you who saw the remake of the Karate Kid movie will recall a scene set at a puppet show using some traditional Chinese transparent puppets, quite similar to the shadow puppets. 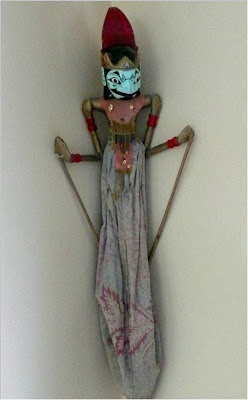 Although I have had a long history of puppet making since I was 12 yrs old I became very intrigued with the Indonesian puppets and related puppet plays after admiring my sister in law's puppet collection. (her Mom lived for a time in Indonesia). 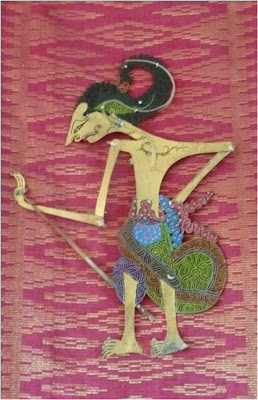 ....and here is her traditional "Arjuna" on which this art project is based.

We will be making our own "Arjuna" puppet and you can add other traditional characters if you wish once you have the process down. 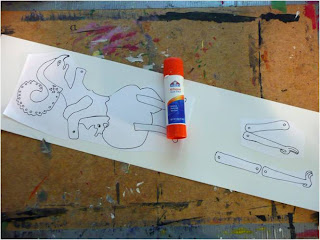 Now traditional puppets are made from animal skin but we are going to make ours from cardstock.  If you wanted to make the transparent type you can adapt this project using a heavy duty transparency sheet (photocopy the template directly on to it) 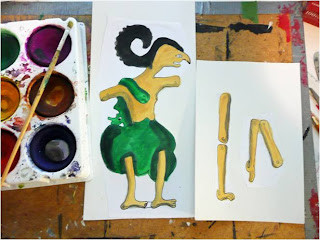 Let's add some color....even though you won't see this in the shadow these puppets are works of art so let's make them as appealing even when they are just waiting to be played with.


Paint in the details and then use a fine sharpie for outlining and definition. 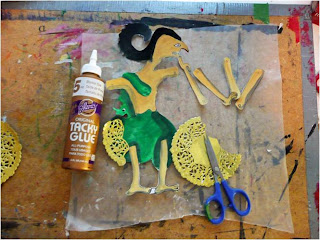 Cut out all the pieces to your puppet.  I wanted to add some embellishment so I added a piece of a gold doily.

The doily can also stick out from the puppet as it casts a great elaborate shadow on its own. 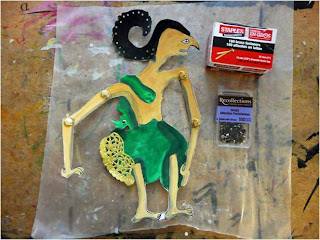 Using a single hole punch, press punch or even tip of a knitting needle punch a hole in all the little circles on the pattern.  You can also add some extra holes for decoration (look good in the shadow) Here I added some extra to his hairstyle.

These are your joints so you can have some movement in your puppet.  Attach some paper fasteners.
If the ends from the large fasteners are too long just fold back on itself or you can trim them off with scissors. 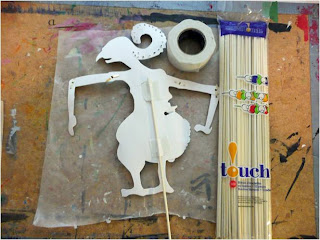 Attach the main part of your puppet to a skewer.


I used hockey tape for mine.  I love making things with hockey tape, it's cheap, it's white so it can be painted or drawn on and it's everywhere. (at least here in Canada it is) 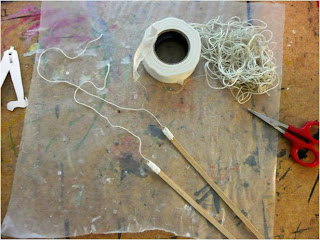 Now the best way to attach the wooden coffee stir sticks to the arms is by string.  You can get better movement for your puppet.

Here I attached a piece of string to the stir stick using, you know,  Hockey tape.

I then wrapped the string around the wrist of the puppet as tight as I wanted and tied it off.  This enables the stir stick to sideways from the arm which makes the puppet easier to manipulate. 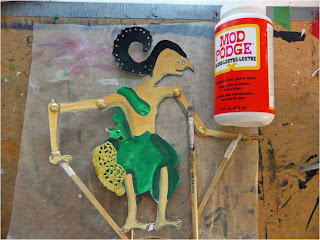 You can add a coat of mod podge to your puppet so it will last through many performances! 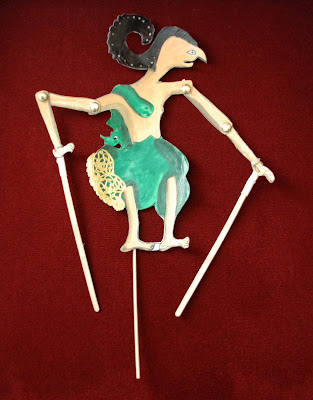 and that's it! Check in google and you can find many images of Wayang Kulit characters as well as some of the traditional plays and you can build your own little puppet troupe.
I'll see you next time.